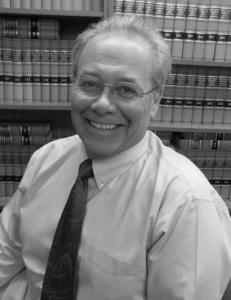 Bob began practicing law in 1983 after graduating from the University of Dayton School of Law with a Juris Doctorate degree.  Bob was admitted into the Bars of New Jersey and Pennsylvania in the fall of 1983.  He has subsequently become a member of the Bars of Maine and West Virginia.

Upon graduation from law school, Bob became a judicial law clerk to the Honorable Rudolph J. Rossetti, J.S.C. During his clerkship, Judge Rossetti was assigned to the Criminal Division and also handled municipal appeals. In his clerkship, Bob estimates that he may have reviewed upwards of 500 cases from the various municipal courts in the Camden vicinage.  Bob is Certified by the Supreme Court of NJ as a Municipal Court Trial Attorney. Only 21 attorneys in NJ have earned that distinction.

Although Bob handles many municipal court matters, he has handled many areas of the law in his 32 + years in practice. Criminal Law, Personal Injury, Divorce/Family Law, Wills, Real Estate, etc., his practice is a “general practice” and will be able to help you through any legal problem or issue that you may be facing.